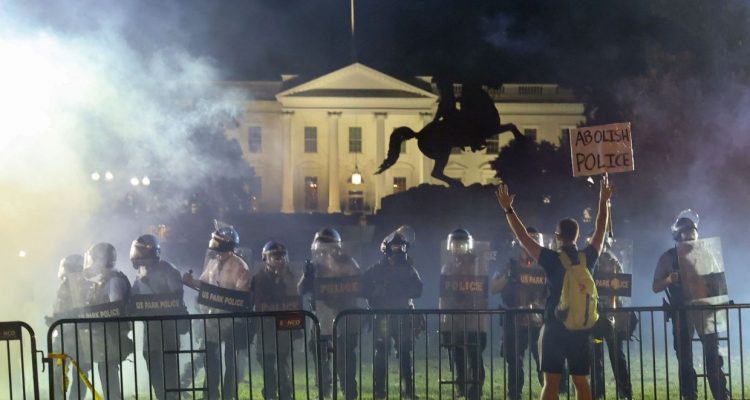 The capital of the United States looked like a war-zone last night as rioters believed to be led by the far-left group known as “Antifa” spread chaos in Washington, D.C..

The White House guardhouse was said to be set on fire at one point and the lights illuminating the president’s residence were shut off for security. The president is rumored to have been moved briefly to a bunker but the Secret Service declined to comment on security measures.

Protests sparked by the death of George Floyd last week turned violent as they were seemingly hijacked by the fringe group known as Antifa, short for “anti-fascist.” The anarcho-socialist group appears to be exploiting the public outcry over the tragic death of Floyd in Minneapolis.

Most notably set ablaze by the rioters was the historic St. John’s Church, also known as “the Church of Presidents.”

Governors in at least a dozen states have called upon the National Guard to assist law enforcement in repelling violent riots which have swept more than 30 U.S. cities.

The president spoke on the crisis at the NASA/SpaceX shuttle launch Saturday saying,

“We support the right of peaceful protests and we hear their pleas. But what we are now seeing on the streets of our cities has nothing to do with justice or with peace. The memory of George Floyd is being dishonored by rioters, looters, and anarchists.”

There have been multiple reports of large pallets of bricks being set up on major street corners in advance of the riots indicating the incidents are being funded and choreographed.

Even before the destruction in Washington D.C. President Trump announced Sunday, “The United States of America will be designating ANTIFA as a Terrorist Organization.”

The overnight violence spurred Terrence Floyd, brother of George Floyd, to speak out this morning. Terrence told reporters today that his brother “was not about that” adding that he “was for peace” and calling him “a gentle giant.”