Rush Limbaugh: El Rushbo posted his analysis on Comey’s interview with George Stephanopoulos that aired on ABC News Sunday night. Of course the network and Comey, who’s promoting his new book, are hoping for a large audience. Rush Limbaugh has the preliminary information on the numbers from the show, including the Walking Dead’s season cliff-ender, and the CMA’s, the Country Music Awards. While the numbers may or may not be important, Rush Limbaugh’s analysis includes what he believes the left thinks is happening. Hint, it isn’t what THEY think. 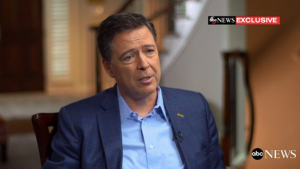 Here’s an excerpt from Rush Limbaugh:

You would figure over here on the side where America gets up and goes to work every day, makes the country work, you would think that all of that negative attention, would be causing Trump to lose support. And you would think that James Comey would be loved and adored by everybody, when he goes on TV would have far and away the biggest ratings, the highest audience. It isn’t happening, just isn’t happening. And the Democrats and the media are counting a lot of chickens here before they’ve hatched.

No Comments on "Drive-Bys Drop Syria for Comey | Rush Limbaugh"