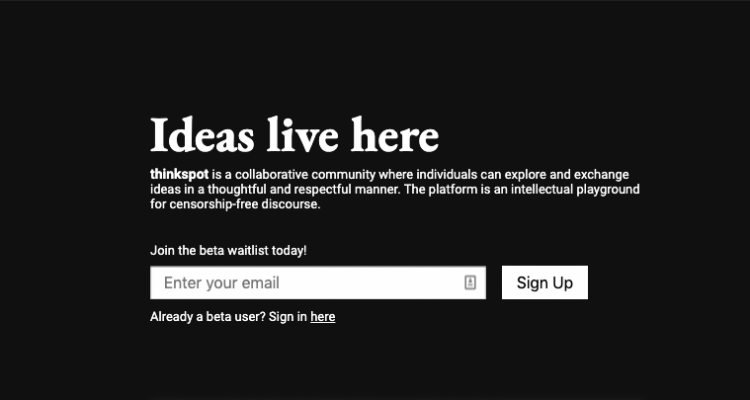 In December 2018, Sam Harris, Jordan Peterson, and Dave Rubin announced that they were leaving the crowdfunding platform, Patreon. This was in response to Patreon banning popular Youtuber, Carl Benjamin, known online as Sargon of Akkad, without any prior warning. The content was not hosted on Patreon or his own Youtube channel it and did not break Patreon’s published community standards.

Sam Harris, who had the 13th largest Patreon account, canceled it within days of the expulsion.

Patreon’s “Trust and Safety” team then tried to justify the ban, saying the following, even though the people that Benjamin was arguing with were white supremacists:

Jordan Peterson and Dave Rubin put a video out shortly after, saying they were leaving the platform too. Peterson went further than that, saying that he was going to work on a free speech platform.

That platform came to fruition yesterday when he announced Thinkspot. From discussions that Peterson had on the Joe Rogan podcast on June 9th, Thinkspot is going to be a very different kind of site than we are used to, with radically pro-free speech Terms of Service.

This is an exciting development, at a time when big tech is removing conservatives on a number of their platforms. We’ll update with further info as it becomes available.

My friend, Jordan Peterson, wrote this a year ago. It is a challenge in part...More

What Is The True Agenda?