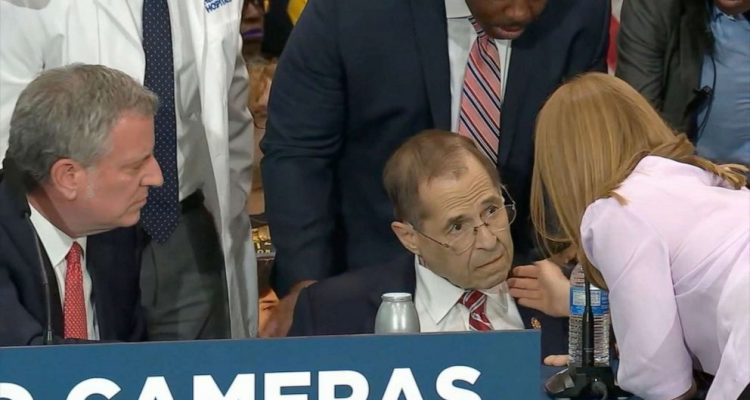 U.S. Representative Jerry Nadler (D-NY) had a health scare while at an event alongside the newest Democrat to run for President, New York Mayor Bill de Blasio.

The Mayor can be seen on video offering a water canteen to the Congressman who appeared incoherent and possibly dehydrated. In a moment that humanized both men, the exchange was as follows:

Mayor: “You wanna take a drink of this? How you feel, man? You feel okay? You alright? Here, you want, drink some of this.”

Bystanders called for a Doctor and Mr. Nadler can be seen eventually taking a drink from Mayor Bill de Blasio’s water canteen. A woman can be heard over the intercom announcing a “code blue” in the gym.

Within moments, three doctors in white coats surrounded the nine-term Congressman. Mayor de Blasio can be seen smiling at Mr. Nadler as if he had become more aware.

Watch the video for yourself:

Congressman Nadler has become a household name in recent months since Democrats took control of the House of Representatives and Speaker Pelosi appointed him to be the Chairman of the powerful House Judiciary Committee.

Within days, Mr. Nadler was back at work which includes weighing the possibility of impeachment proceedings against President Trump when just Wednesday he said:

“With respect to [the] impeachment question, at this point, all options are on the table and nothing should be ruled out.”

It is a break with Speaker Pelosi who continues to refer to the prospect of impeachment as a “very divisive” and undesirable tactic. However, in recent months she has pivoted to accusing President Trump of a “cover-up”.

The results of the 2020 Election will tell the story of whether the impeachment rhetoric hurts or helps either party. It is entirely possible that it has the same impact as the constant “Trump can’t win” narrative pushed in 2016 by the liberal media; that impact being a boost to the enthusiasm and determination of Trump’s “deplorables”.

Current News: Impeachment, Brexit, And So Much More!

Have you been tracking what's happening in the capital as the impeachment proceedings have gone...More

While Candace Owens testified as a witness for a House hearing on hate crime, Rep....More