A heated debate over the subject of abortion ensued Monday night on CNN with host, Chris Cuomo, Rick Santorum, and panelist Christine Quinn. Quinn and Cuomo both emphatically denied that what grows in a mother’s pregnant womb, is a separate human being. 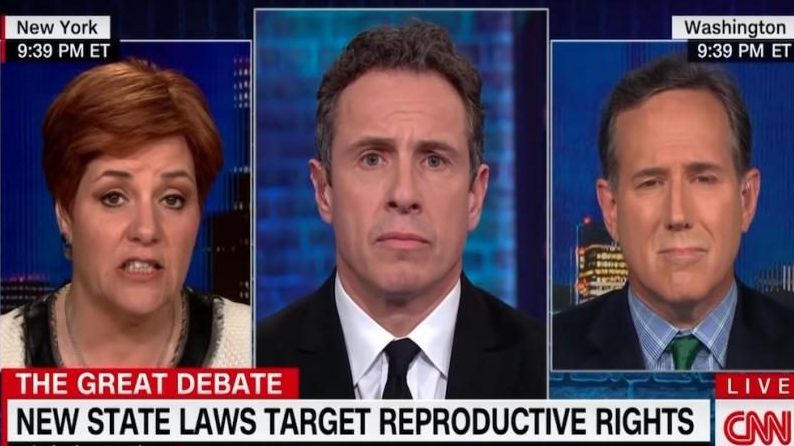 When it again became Quinn’s turn to speak, she flatly declared that “when a woman gets pregnant, that is not a human being inside of her. It’s part of her body.” Contrary to Quinn and Cuomo’s claims, long-settled biological criteria and numerous mainstream scientific and medical textbooks have established that a living human being is created upon fertilization and is present throughout the entirety of pregnancy. Many abortionists and pro-abortion activists and philosophers admit as much, granting preborn babies’ humanity while either claiming a mother’s “bodily autonomy” trumps a baby’s rights or drawing a philosophical distinction between humans and persons (arguments pro-life philosophers have extensively challenged).

The final subject the panel touched on the topic of infanticide, with Cuomo taking exception to the “President of the United States saying that a baby is born at the end of full-term, swaddled in a blanket, and then they decide whether or not to execute it.”

Source: CNN Guest: ‘When A Woman Gets Pregnant, That Is Not A Human Being Inside’ | LifeSite News

No Comments on "CNN Guest: ‘When A Woman Gets Pregnant, That Is Not A Human Being Inside’"