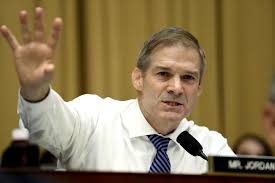 oann news report that Rep. Jim Jordan, the ranking member of the House Oversight Committee said that Republicans intend to subpoena the Ukraine whistleblower central to the Democrats impeachment inquiry. Speaking to reporters he said:

His comments come amidst questions of the political motivations of the whistleblower, as reports have alleged that he is a registered democrat and worked closely with ex VP Joe Biden. Jordan then went on to say:

You always look for two things when a whistleblower comes forward: did they have firsthand knowledge and what is their bias and/or motive?… it’s been reported he worked for Vice President Biden, that’s why we need to know this information.

The GOP has until Saturday to submit their potential witness list. Even if they named the Ukraine whistleblower, the Democrats will most likely deny the witness, since they have sworn to protect their identity at all costs.