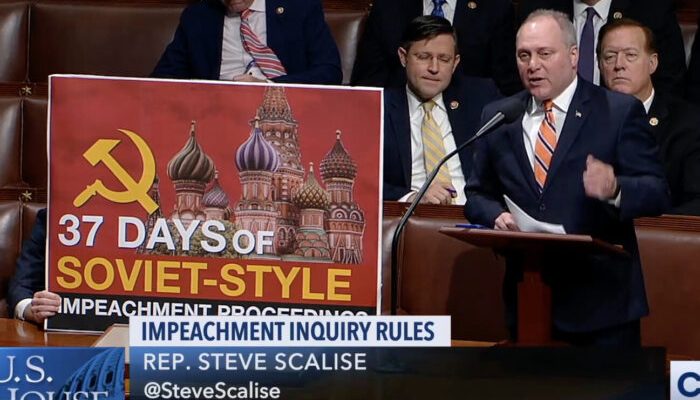 The national debate over impeachment has been raging for months with Republicans and the White House daring Speaker Pelosi and House Democrats to bring it to the floor for a vote.

Nancy Pelosi (D-CA) today did just that, introducing an impeachment resolution but not “articles of impeachment” which is the only constitutionally recognized procedure.

Instead, the resolution that was passed will allow Democrats to publicly continue their charade as they attempt to undermine President Trump’s chances of re-election in 2020.

“This is unprecedented. It’s not only unprecedented, this is Soviet style rules. Maybe in the Soviet Union you do things like this where only you make the rules.”

The potential future Speaker of the House decried Democrats’ abuse of power, lack of fairness, and insistence of impeaching the President to reverse the results of the 2016 election.

“Unfortunately we’ve seen since the day that President Trump was inaugurated, there have been some people that made it public that they wanted to impeach him, not because there are high crimes and misdemeanors, which is the constitutional standard, but just because they don’t agree with the results of the 2016 election. That, Madam Speaker, is not why you impeach a President.”

Impeachment was never intended to be used as a political weapon to undermine the President’s chances in the next election. The American people should, and I believe they will repudiate Speaker Nancy Pelosi and House Democrats by re-electing President Trump and giving Republicans back the majority so that the adults in the room can start governing once again.