While on America’s Newsroom Friday, Trey Gowdy stated that people have quit sharing information with the House Intelligence Committee. The reason he stated was due to its chairman Democrat Adam Schiff’s deep partisanship, and that he is leaking like a “sieve.” 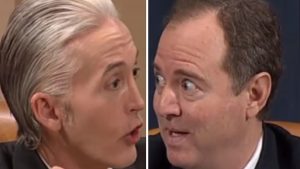 Those lawmakers pressed intelligence community Inspector General Michael Atkinson for details during Thursday’s closed-door testimony before the House Intelligence Committee. The Associated Press reported, though, that he would not discuss the substance of the complaint. The Post and the New York Times, citing anonymous sources, reported Thursday evening that at least part of the complaint involves Ukraine.

Schiff voiced concerns about not having access to the information and warned Congress could use legal action or budgetary powers as leverage to force the White House to open up about the complaint.

Source: Gowdy Slams Adam Schiff For Being ‘Deeply Partisan,’ Says He Is ‘leaking Like A Sieve’ | Fox News

No Comments on "Gowdy Slams Adam Schiff For Being ‘Deeply Partisan,’ Says He Is ‘leaking Like A Sieve’"