If you live in California and want to vote for President Trump, it looks like you’re straight out of luck. Fox News are reporting that Democrats in California have passed a law that would specifically keep President Trump off the ballot, taking the decision away from their own voters:

California’s Democratic governor and Legislature don’t believe the state’s voters should have the right to decide who they want to be president of the United States. So in a blatantly unconstitutional move, the Democrats have enacted a law specifically designed to keep President Trump off the state’s March 2020 presidential primary ballot.

The new law says that candidates for president and governor in California must disclose their tax returns in order to appear on the primary ballot next year. President Trump has not released his tax returns and no federal law compels him or any other American to do so.

This stunning and unprecedented assault on democracy by what should properly be called the Undemocratic Party would make it impossible for Trump to win a spot on California’s November 2020 general election ballot and would hurt Republicans in down-ballot races as well. 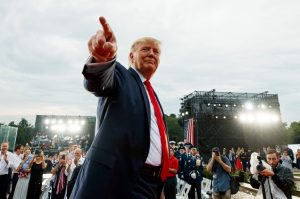 Aggressive legal suits are challenging the constitutionality of California’s new law, arguing that states shouldn’t be able to add new requirements about who can run for president willy-nilly.

The outcome doesn’t matter for Trump or the 2020 election, but it could have profound implications for future presidential elections. If California’s law withstands these legal challenges, what would stop a swing state held by one party in 2024, for example, from implementing a similar requirement designed to block a major party candidate from the ballot?

Trump and the National Republican Committee quickly filed federal lawsuits against the measure, saying the law is unconstitutional and infringes on the president’s free speech. The California Republican Party filed a lawsuit as well. The state Supreme Court has decided to hear both cases in a matter of weeks, which is a “very uncommon” move, according to Leslie Gielow Jacobs, a constitutional law professor at McGeorge School of Law in Sacramento, California, and probably means the justices are wary of the new push.

No Comments on "Assault on Democracy: California Dems Try To Force Trump From The Ballot"