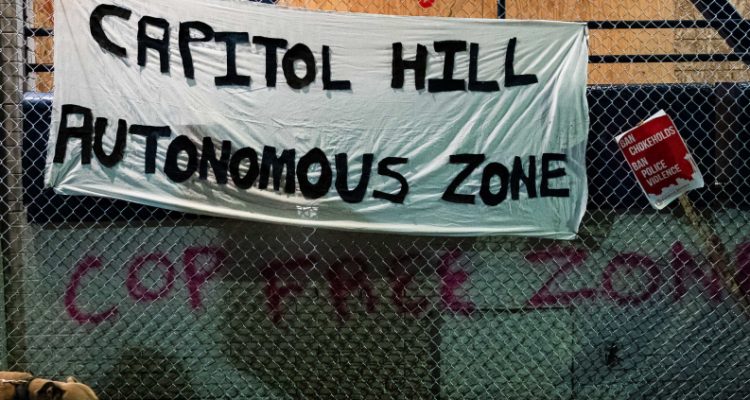 A rebellion led by the Anarcho-Communist group Antifa has resulted in the seizure of six blocks surrounding City Hall in Seattle, Washington.

The development came overnight as hundreds were apparently let into City Hall by Kshama Sawant, a sympathetic city council member, where they called for Mayor Jenny Durkan to resign and for the Seattle Police Department to be “defunded.”

The group now controls a six block radius surrounding the building, the “Capital Hill Autonomous Zone” as they call it, which they say they will police themselves.

The chaos comes after police tried to deescalate the situation following two civilian fatalities stemming from clashes with demonstrators. The mayor banned the use of tear gas on Friday and it appears the nearby police station was abandoned on Monday.

While the path forward is unclear, the circumstances are a recipe for disaster. And if those responsible have a hint of affiliation with Communist Party USA or its affiliates, the rioters may be in for a very rude awakening. Title 50, Chapter 23 of the U.S. code reads in part:

So with or without slapping a “terror” designation on the group known as “Antifa”, existing law appears to already strip the blessing of American citizenship from any members or participants who are deemed to be affiliated in any way with the Communist Party.

While President Trump certainly has the authority to protect the sovereignty of the United States, he should expend every tool at his disposal to force the hand of Washington Gov. Jay Inslee (D) in case things do not go smoothly.

But if he must, it may be time to follow through on his threat to invoke the Insurrection Act of 1807. If done effectively and without casualties, quelling the Seattle rebellion could cement Trump’s self-proclaimed position as the “law & order” president.

President Trump spoke on the crisis in Seattle late Wednesday writing the following:

“Radical Left Governor @JayInslee and the Mayor of Seattle are being taunted and played at a level that our great Country has never seen before. Take back your city NOW. If you don’t do it, I will. This is not a game. These ugly Anarchists must be stooped IMMEDIATELY. MOVE FAST!”

2 Comments on "Antifa Takes Control of Six Blocks in Seattle, What Now?"