UCA News: Reports of persecution are coming in from an area in the northern district of Uttar Pradesh where there has been beatings and other attacks taking place. There have been at least 12 incidents taken place just in September some of which were instigated by false accusations against missionaries working with local Hindus. 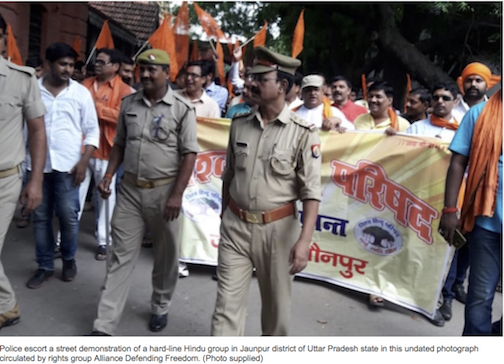 Pastor Benjamin said such incidents had increased since the pro-Hindu Bharatiya Janata Party (BJP) came to power with a Hindu monk-turned-politician, Yogi Adityanath, becoming state Chief Minister in March 2017.Nearly 80 percent of Uttar Pradesh, India’s most populous state with 200 million people, are Hindus. Christians constitute only 0.18 percent of the state’s population while Muslims number more than 19 percent. Jaunpur district has only about 300 Christians in a predominantly Hindu population of some 180,000 people, according to government statistics.Some media reports say the district has been witnessing increased religious activity by pastors from neo-Christian groups and that thousands of ordinary villagers, mostly poor Dalit people formerly known as untouchables, have converted to Christianity.

No Comments on "An Indian Anti-Christian Hotspot | UCA News"