Emmanuel Miller, a writer for The Times of Israel wrote this article as a response to an editorial piece from The Guardian. The Guardian’s article which was one-sided while criticizing Israel, included parroting Hamas propaganda. 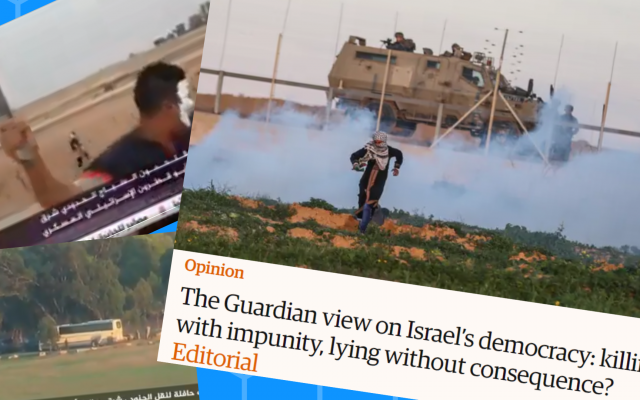 Instead, the article opens with talk of “Palestinians” being “killed at the rate of around one a day”. The mind boggles at how sensible, educated people regard the fact that Israel defends itself from Palestinian violence using lethal force as somehow an indictment on Israel. Instead of questioning why Palestinians repeatedly eschew peaceful protests to take up arms and attack Israelis, The Guardian focuses on why Israel defends itself.

Instead of querying Palestinian motives, the editorial unquestioningly repeats the Palestinian mantra that these protests were about the “right” to return to ancestral homes. This is false on multiple fronts – first, because while that was indeed the original concept, the protests were swiftly co-opted by Hamas and used as a pretext to invade Israeli borders. Numerous videos exist of rioters and terrorists entering Israeli territory with machetes, burning Israeli army posts and fields to the ground, and destroying humanitarian crossings.

Source: A hatchet job of an editorial in The Guardian | The Times Of Israel